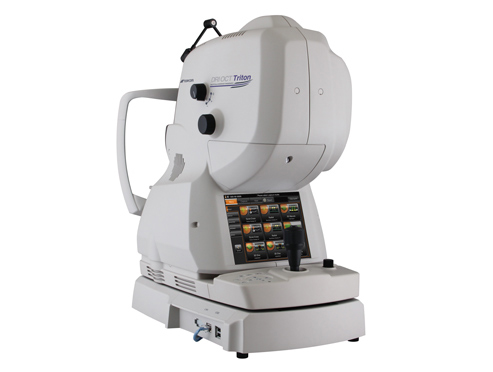 The DRI OCT Triton uses a 1 micron, swept source as a light source. The multimodal instrument incorporates the diagnostic power of Swept Source OCT including anterior segment with a retinal camera for color, red-free, FA and FAF imaging.

The Triton Series provides comprehensive imaging and increases diagnostic capability in your practice. It has gained a high reputation in Japan, Asia, Europe and the Middle East.

The Triton is expected to meet the needs of the large US market. It is the first multimodal Swept Source OCT approved by the FDA and is equipped with a normative database. Topcon Medical Systems, Inc. will display it at the following upcoming shows : SECO on February 28th in Atlanta, GA, American Glaucoma Society on February 28th in New York, Vit-Buckle Society on March 22nd in Miami, FL, and Vision Expo East on March 16th in New York.

Topcon is expecting substantial sales increases after launching the DRI OCT Triton in the US.

A 1μｍ wavelength for high penetration of ocular tissue. This makes it easier to observe deeper pathology in the retina even through media opacities.

A high scanning speed of 100,000 A-Scans/second that reduces motion effects of the eye and a non-visible light which makes patient fixation easier.

A multimodal instrument that can capture the following high quality retinal images that are clinically required. 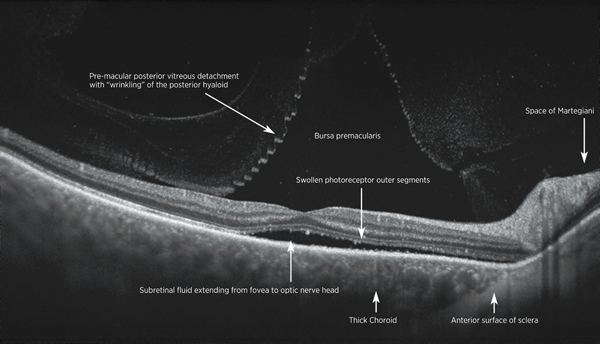 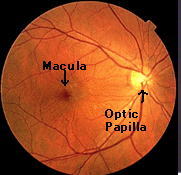 The retina is equivalent to the film of a camera, and the light from outside passes along the vitreous body of a pupil, a lens, strikes upon the retina, and sence light.
Since there is pigment called xanthophyll in a macular abundantly, yellow is carried out.
In the film and the retina of a camera, it may differ greatly.
Although any portion may be sufficient and it is reflected with the film of a camera, and eyesight with the very sufficient retina at the center of macular is acquired, in the other place, sufficiently good eyesight is not acquired by a normal eye, either.
Although a macular is a very small portion, eyesight declines remarkably, and it becomes impossible therefore, to update a driver’s license or to read a character, even if there are no abnormalities in the retina in addition to it, when the obstacle of the macular is carried out.

A macula in the center of the retina become senescent, and new blood vessel grows under the retina when a waste material is accumulated and happens blurred vision by break down visual cells and the bleeding of the visual cell.

A vitreous body touch with macula transforms it by changes that occur with age.
Also, a hole is a disease to open on retina by pulling macula area for the center of the retina. Because there is a hole in the center as a symptom, If your eye field is lacking or get distorted.

The state that a film formed on the macular surface is epiretinal macular membrane.
Denaturation happens to the vitreous body that a lot of things by the aging occupy most in eyes and may stay to the macula when a vitreous body leaves the retina. It thickens and becomes epiretinal macular membrane.
It may be caused by inflammation in eyes including other injuries, uveitis.
There may not be subjective symptoms, but the collar which it is warped by the thickness of the film which formed on the macula, shrinkage condition, and was seen may become hard to be seen.

Glaucoma is a leading cause of blindness. Glaucoma can cause blindness if it is left untreated. And unfortunately approximately 10% of people with glaucoma who receive proper treatment still experience loss of vision.

With medication and/or surgery, it is possible to halt further loss of vision caused by glaucoma. Since glaucoma is a chronic condition, it must be monitored for life.

Diagnosis is the first step to preserving your vision.

Everyone is at risk for glaucoma from babies to senior citizens. Older people are risk for glaucoma but babies can be born with glaucoma (approximately 1 out of every 10,000 babies born in the United States). Young adults can get glaucoma, too. African-Americans in particular are susceptible at a younger age.

There may be no symptoms to warn you about Glaucoma, since usually no pain is associatetd with increased eye pressure. With the most common form called open angle glaucoma, there are virtually no symptoms.Vision loss begins with peripheral or side vision. You may compensate for this unconsciously by turning your head to the side, and may not notice anything until significant vision is lost. The best way to protect your sight from glaucoma is to get tested. If you have glaucoma, treatment can begin immediately.

Diabetic eye disease refers to a group of eye problems that people with diabetes may face as a complication of diabetes. All can cause severe vision loss or even blindness.

Course of Ophthalmic PDT Study Group
Number of cataract surgery up to the present:About 4000