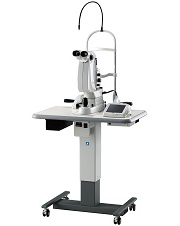 It is used for the treatment of after-cataract that occurs after cataract surgery and for selective laser trabeculoplasty for open-angle glaucoma.

Treatment for after cataract

A few months to a few years after cataract surgery, symptoms such as "glare," "reduced vision," or "blurred vision" may occur again. This is known as "after cataract" and occurs because the posterior capsule of the lens becomes cloudy. The clouding can be removed with the YAG laser, and vision is restored immediately.

SLT (Selective Laser Trabeculoplasty) is one of the main methods of treating open-angle glaucoma.
The anterior chamber of our eye is filled with a fluid called aqueous humor. It is constantly secreted from the ciliary body and drained out through the trabecula, and circulate in the eye to maintaining intraocular pressure a constant in the eye. However, if the aqueous humor is blocked for some reason (e.g., clogging of the trabecula), it accumulates in the eye, leading to an increase of intraocular pressure and the progression of glaucoma.
SLT is a treatment that uses a laser to burn pigment cells in the trabecula that are blocking the aqueous humor from draining out, thereby improving the flow and lowering intraocular pressure. This treatment can be performed as a one-day procedure and considered for those who tend to forget or feel inconvenient to use eye drops, or for those who are pregnant or have difficulty using them due to side effects.

Course of Ophthalmic PDT Study Group
Number of cataract surgery up to the present:About 4000